The first part of AJ’s treatment will last for 28 days. Today is what they call day 0 or day Negative 1. Her day began at 8 and just ended. I can’t think of a single procedure or test they didn’t run. First she had a ultrasound on her brain. Then she went down to the OR and had her PICC line put in, a bone marrow biopsy, and lumber puncture. Once she made it out of recovery we thought she’d get a break. I mean she was in recovery barely 6 minutes before she was insisting she be allowed to go to the bathroom alone. But in reality there were more test to run. She had an EKG and an ultrasound of her heart done. After that she went for her lap around the floor. We were then taken into a room to discuss the induction part of her treatment. This was probably Ava’s only time to nap. After waking up she learned the beautiful flower her cousins brought are not allowed on the floor. Then around 8 we learned that since she had yet another fever she would need to have a CT Scan to rule out an underlying infection. So we closed out the day with a trip to the radiology department which should brought news of a kidney infection.

I’m not going to lie it was a totally crappy day. As usual Ava was brave and such a trooper 99% of the day. The other 1% was the first time she let her pain and fears through. It broke my heart to hear her ask how this happened and beg us to take her home. But it gave us an opportunity care for her. She finally let us in and let us parent her.

However there were some highlights to her day. My amazing team sent her chocolate covered fruit, her aunt sent Insomnia Cookies, her cousins stop by and brought Chick-Fil-A. We were able to locate Dr. Pol on Hulu. She got some good episodes of the Cosby Show in. We’re so lucky Prime and Netflix have her favorite TV shows streaming so she’ll never be without I Love Lucy, The Cosby Show, The Golden Girls, and Friends. Hopefully these will ease the news that we may end up being here for the next 28 days. I’ll end with pictures of my badass cancer fighting warrior’s day. 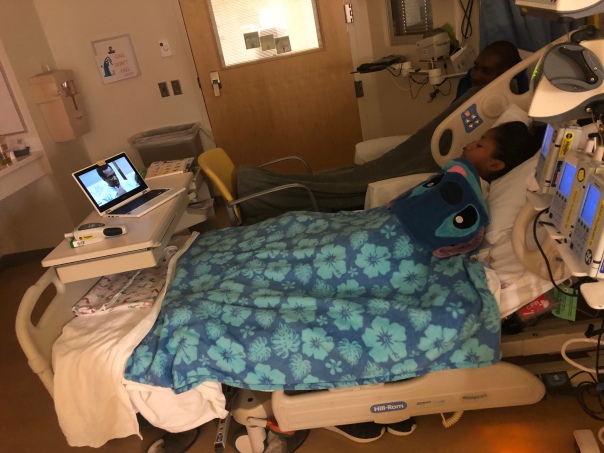